Visitation: Visitation will be on Friday at 2:00 pm until 8:00 pm with the family present from 6:00 to 8:00 pm at Anderson Funeral Home, Canton, SD.
Service: Her funeral will be on Saturday, November 23rd at 10:30 am at Canton United Methodist Church in Canton, SD 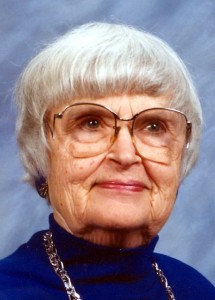 Miriam was born at a farm near Fairview, SD on October 11, 1922 to Edwin and Violet (Crawford) Loken.  She attended rural school and Fairview High School, graduated in 1940 from Augustana Academy in Canton, SD. After attending college at Southern Normal School in Springfield, SD she taught rural schools in Lincoln County.  While she was teaching at Pleasant View School District 31, she met H. Scott Hardy.  They married in June 3, 1944.  They lived on a farm in rural Beresford where they raised seven children. She continued her education at Augustana College in Sioux Falls, SD receiving a master’s degree in Elementary Education.

Miriam enjoyed teaching school, raising a garden, and helping on the farm.  She especially enjoyed entertaining relatives and friends.  She belonged to Progress Extension Club, the local Birthday Club and was an active member of the United Methodist Church.  She taught Sunday school and Bible school for many years.

She is survived by her seven children: Dennis (Lynette) of Beresford, LaVonne of Beresford, Daryl (Karla) of Canton, Lynn (Lorrie) of Milbank, Brian (Robin) of Sioux Falls, Marilyn (Richard) Hyronimus of Beresford, and Jan (James) Claggett of Syracuse, NY.;  22 grandchildren; 22 great-grandchildren; her sister, Elverna Buttz of Ankeny Iowa,  and many nieces and nephews.

Her family would like to express their gratitude to the superb care that Miriam received at Bethesda Nursing Home.