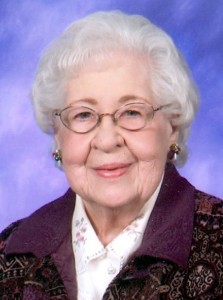 Beulah was born on October 30, 1922 in Beloit, WI to Albert and Elsie (Hunt) Engen.  She lived in rural Wisconsin until moving at age 3 to a farm southwest of Canton, SD.  She graduated from Canton High School and received a teaching degree from Sioux Falls College.  She married Darrell French on September 1, 1944 in Luverne, MN.  The couple made their home on a farm west of Canton.

Beulah taught elementary education in mostly rural schools.  She retired in 1973.  She had been a member of Canton United Methodist church since 1937.  She served the church as a Sunday school teacher, member of the administrative board, and member of the United Methodist Women.   She led many neighborhood bible studies which often concluded with her testing her newest dessert recipe.  In addition she was involved in the extension club and was a 4-H leader.

Beulah and Darrell traveled extensively.  They toured all 50 states, Canada, and Mexico.  She also enjoyed reading, sewing, and square dancing.   She loved to be in the kitchen and was known for her wonderful cooking and baking skills.   She was famous for her ability to stretch a meal to feed stranded travelers or unexpected guests.   Most of all, she loved spending time with family and friends.

Grateful for having shared her life are her four children, Glenn French of Canton, SD, Darla (Roger) Cronn of Plymouth, MN, Marlys French of Sioux Falls, SD, and Sherrie French of East Dover, VT; and two granddaughters, Shannon and Dana Cronn.   She was preceded in death by her parents and husband, Darrell.