Visitation: Visitation, with family present, will be Monday from 5-7 p.m. at Anderson Funeral Home in Canton.
Service: Memorial services will begin at 2:00 p.m. Tuesday, Jan. 22 at Canton Lutheran Church. 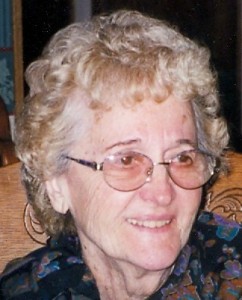 Mary Alice Lintvedt, 94, passed away on Friday, January 18, 2013 at Sanford Hospice Cottage in Sioux Falls.  Memorial services will begin at 2:00 p.m. Tuesday, Jan.  22 at Canton Lutheran Church.  Visitation, with family present, will be Monday from 5-7 p.m. at Anderson Funeral Home in Canton.  In lieu of flowers, memorials may be directed to the Bessie Sletto Lintvedt Augustana College Scholarship Fund or to Canton Lutheran Church.

Mary Alice Mallory was born on May 23, 1918 in Mitchell, SD to Mary and William Mallory.  She attended Lennox High School, Augustana College, and graduated from USD in 1944.  Mary Alice served in the Navy Singing Platoon and The Drum and Bugle Corp during WWII.  Following her military service, she taught in Flandreau and Midland, SD and Salem, OR.  She married Loren Mussler in 1946.  In 1990 she married Maynard Lintvedt.  They lived in Canton, SD until moving, in 2009, to Touchmark at All Saints in Sioux Falls.

Mary Alice was active in community theater in Salem, OR and with the Corson Mighty Arts Players in Corson, SD.  She loved music and shared her talents in church and community activities.  She had an avid interest in current affairs and often voiced her opinions in letters to the editor.

Mary Alice was preceded in death by her husband, Maynard; an infant daughter; her daughter, Elizabet; and three brothers.