Visitation: Visitation will be at Anderson Funeral Home in Canton, SD on Saturday from 2:00 to 6:00 PM, with family present from 4-6 PM.
Service: Services will be held at 2 PM on Sunday, November 25 at Canton Lutheran Church. 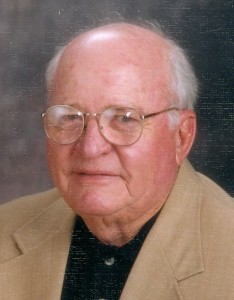 Lloyd Verley, age 85, passed away on Wednesday, November 21, 2012.  Lloyd was born in Hurley, SD on January 12, 1927 to Myron and Katherine (Lode) Verley.  His family moved to Davis, SD when he was eight.  At age 16 he went to Akron, Ohio to work at Goodyear Tire.  Then he joined the 11th Airborne as a paratrooper during World War II.  He married Geraldine Calvert from Castlewood, SD on March 1, 1949 in Luverne, MN.

Lloyd and Gerry moved to Canton, SD in 1954 where Lloyd worked as a well driller until 1972.  He then started Harvestore Construction and worked all over the US and Canada until 1987.  He continued to work part time for Eastern Farmers Coop into his 80’s.   He and his wife enjoyed spending several winters in Arizona where they made many wonderful friends.

Lloyd was a member of Canton Lutheran Church.  He served ten years as a Canton volunteer fireman.  He was a past Commander of V.F.W. Post 3164 and a past First District Commander for the State of SD.

Preceding Lloyd in death are his parents, his brothers Roscoe, Lester, and Clarence and two sisters, Gladys Kroger and Florence Buskohl.

Services will be held at 2 PM on Sunday, November 25 at Canton Lutheran Church.  Visitation will be at Anderson Funeral Home in Canton, SD on Saturday from 2:00 to 6:00 PM, with family present from 4-6 PM.