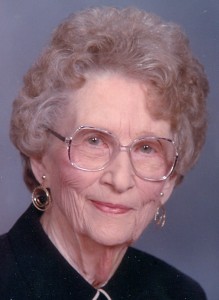 Olive Nelson was born November 9, 1914 to May Sogn and John M. Nelson at their farm home near Beresford.  She was baptized at Romsdal Lutheran Church.  In 1926 she and her family moved to Canton.  She was confirmed at Canton Lutheran Church and was a lifelong member of the church.  She graduated from Canton High School in 1932.  She then attended General Beadle College in Madison for 1 year.  She was employed in Sioux Falls and the bakery in Canton before her marriage.

She married Clifford Rikansrud on June 10, 1938 at the bride’s home. The couple made their home northwest of Canton where they farmed and raised their three children: Gary, Janis, and Kirk.  She was a girls’ 4H leader and was active in the church’s bible and Sunday School programs, boards, and circle.  She served on the Altar Guild for over 20 years.