Visitation: Visitation will be Tuesday from 2-8pm, family present 6-8pm, at Anderson Funeral Home in Canton.
Service: Funeral services will begin at 10:00am Wednesday, October 3, at Canton Lutheran Church. 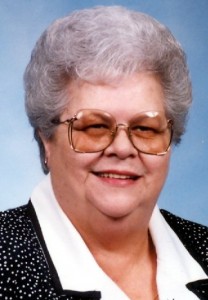 Joyce was born April 26, 1931 in Volga, SD to Oluf & Ingrid (Rognan) Hammer.  She married Ozzie Wiebe on January 23, 1950 in Luverne, MN.  Prior to her marriage she worked as an telephone operator.  After marriage, she worked for Otis Radio, Canton Good Samaritan Center, and Canton-Inwood Hospital.   She was a great cook, especially meatloaf and goulash.  She also enjoyed crocheting, cross stitching, reading, painting, and spending time with her grandchildren and great-grandchildren.  In addition, she made baptism napkins for her son Darin’s parish for 13 years.