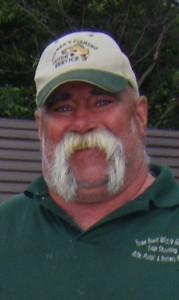 Fairview.  Jerry Dean Van De Stroet, 51, passed away Friday, July 20, 2012 surrounded by his family at Sanford USD Medical Center in Sioux Falls.  Funeral service will be at 2:00 p.m. Tuesday, July 24, at Bethany Reformed Church in Canton, with burial at Forest Hill Cemetery near Canton.  Visitation will be Monday from noon to 4:00 p.m. at Anderson Funeral Home in Canton and will resume at 5:30 p.m. at Bethany Reformed Church.  A prayer service and family sharing time will begin at 8:00 p.m.  www.andersonandsonsfh.com

Jerry was born May 21, 1961in Canton, SD to Case and Alice (Van De Kieft) Van De Stroet.  He attended Fairview Country School and graduated from Canton High School in 1979.  He worked at the Fairview Elevator, Canton Sale Barn, and Excel Machine before returning to the family farm.

Jerry was united in marriage to Sharon Van Veldhuizen September 14, 1985 at Bethany Reformed Church in Canton.  They farmed and raised two children on their farm south Fairview.

Jerry was an active member of Bethany Reformed Church, where he taught Sunday school, Vacation Bible school and enjoyed mentoring the youth.  He was a dedicated husband and father.  He and his family looked forward to their family game night every Saturday.  He liked helping his friends and neighbors, especially in the busy seasons of the spring and fall. He loved his black cows and kept busy fixing corn and bean heads in his spare time.  He was actively involved in The Three Rivers Wildlife and Gun Club where he taught gun safety and trap shooting to the youth.  He also taught many teens how to drive a stick shift.  His favorite outdoor activities included: hunting, fishing, trapping, camping, riding snowmobiles, dirt bikes,  ATVs, and participating and attending demolition derbies, tractor pulls, and enduro races.  He loved to pull pranks on his family and friends.

Those grateful for having shared his life are his wife, Sharon; his son,  Cody and his fiancé, Britney Bott and daughter, Shana; his father, Case Van De Stroet, Canton; sister, Cindy (Paul) Garbers, Canton and their children, Becky (Austin) Parks and Cory Garbers (Bre Meins); and many other family and friends.  He was preceded in death by his mother Alice, brother Gene, and good friends, Vince Beck and Tom Petry.