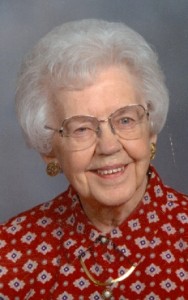 Florence Marie (Sorensen) Little was born on August 4, 1921 at Nunda SD, to Peter and Jenny Sorensen.  At a young age, her family settled on a farm southwest of Canton.  She attended Grand Valley Country School and graduated from Canton High School.  She was married to Oliver Rhead on April 27, 1940.  He passed away on Dec. 17, 1956.  She later married Dale Little on May 26, 1962 and she and her two children moved to Sioux Falls.  Dale passed away Feb. 11, 1998.  She resided in Sioux Falls until she moved to Lennox Good Samaritan Center in 2007, where she lived until her passing.

Florence was a member of First United Methodist Church in Sioux Falls, where she taught Sunday school and was an active circle member.  She also was a member of the VFW and American Legion Auxiliary.  She enjoyed ceramics, knitting, canning and cooking. She especially loved making cookies for her grandchildren and great-grandchildren.

Besides her parents, she was preceded in death by her husbands, one grandson Reid Little, a sister, Fern Rhead, and a brother, Peter Arnold Sorenson.