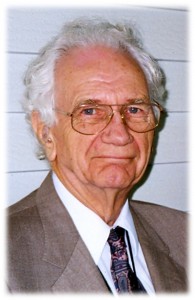 Maynard Glen Lintvedt, 97, passed away peacefully on Friday, Oct. 7, 2011 at his home at Waterford Retirement Community in Sioux Falls.  Funeral services will be Tuesday, Oct. 11, 2011 at 1:30 p.m. at Canton Lutheran Church.  Visitation will be Monday from 2:00 to 8:00 p.m. at Anderson Funeral Home in Canton, SD, with family present from 6:00 to 8:00 p.m.   In lieu of flowers, memorials may be directed to the Bessie Sletto Lintvedt Augustana College Scholarship Fund, the SDSU Scholarship Fund for Engineering, or to Canton Lutheran Church.
Maynard Lintvedt was born on June 11, 1914 on a homestead near Vivian, SD to Carl and Bessie (Sletto) Lintvedt.  He attended Vivian High School, Augustana College, and graduated from SDSU with an electrical engineering degree.  He married Alice Skyaasen in 1941.  They lived in Barberton, OH where Maynard was employed by the Babcock & Wilcox Boiler Company.  In 1953 they moved to Canton, SD, where Maynard became a partner in Skyaasen Insurance Agency, which later was renamed Lintvedt Insurance and Real Estate.  In 1990 Maynard married Mary Alice Mussler.  In 2010 Mary Alice and Maynard moved to Waterford Retirement Community.
Maynard was a member of Canton Lutheran Church and served in a variety of volunteer roles, including president of the congregation and superintendant of the Sunday School.  He also served on the school board for Augustana Academy.  He was a member of the Canton Rotary, served as secretary for 20 years, and was honored with a “Lifetime Rotary Membership” last year.  In 1963 he was named “Man of the Year” by the Canton Development Corporation. He also served as Emergency Management Director for the Lincoln County area for number of years.
Maynard’s hobbies were many and varied.  He was a member of the Grieg Male Chorus, and enjoyed writing news clips for their publications.  He loved wood-working, inventing things, and his lawn and snow removal business.  He was an avid writer, and enjoyed writing his weekly column “As I See It” for the Sioux Valley News.
Maynard is survived by his wife, Mary Alice, his daughters Carol Carlson,(Eldean)  of Fairfield, IA, Marty Johnson (Ray) of Sioux Falls, three grandchildren,  Kristin (Ron) Lucas of Washington, IA, Chris Johnson, of Milford, IA, Rachel (Derrick) Knight of Lakeville, MN, four great granddaughters and one brother, Vernon Lintvedt, of San Diego, CA.
Maynard was preceded in death by his first wife, Alice, his parents, and five siblings. www.andersonandsonsfh.com