Visitation: Visitation will be Saturday from 2:00-8:00 p.m., with the family present from 6:00-8:00 p.m., at Anderson Funeral Home in Canton.
Service: Funeral services will begin at 2:00 p.m. Sunday, July 10 at Canton Lutheran Church with burial to follow at Forest Hill Cemetery. 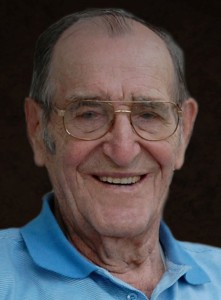 Orval G. Sievers passed away at Sanford Canton-Inwood Hospital on Thursday, July 7, 2011 at the age of 90. Funeral services will begin at 2:00 p.m. Sunday, July 10 at Canton Lutheran Church with burial to follow at Forest Hill Cemetery. Visitation will be Saturday from 2:00-8:00 p.m., with the family present from 6:00-8:00 p.m., at Anderson Funeral Home in Canton.
Orval was born in Emery, SD on August 23, 1920 to Edd and Jennie (Greenfield) Sievers.  He attended Bridgewater High School graduating in 1938.  He worked at John Morrell and Company before entering the US Army in 1942.  He served his country during WWII and was discharged in 1945 decorated with the American Theater Ribbon, EAME Ribbon W/5 Bronze Stars, Good Conduct Medal, Meritorious Unit Award and the Bronze Arrowhead. He continued his service by becoming a lifetime member of the VFW.
He married Cathren Hoefert in December, 1945 in Hartford, SD.  They farmed in the Sioux Falls and Harrisburg areas until moving to Canton in 1965.  He then worked as a hog salesman for Long and Hansen Commission Company until his retirement in 1985.
He was a member of Canton Lutheran Church enjoying his Saturday night group until his health problems prevented his attendance.
He will be lovingly remembered for his quick wit, warm hugs, and a lap always full of grandkids.  He loved fishing, the game of golf, woodworking and teaching grandkids to drive.  He cherished Sundays when the house was full of family – laughing, telling stories and eating Cheetos.  He enjoyed playing cards and will always be remembered for winning “a few hands” of pinochle.
He is survived by his children, Cheryl (Garry) Johnson, Kathy (Ron) Hill, and Brenda (Russ) Heggen all of Canton, and Lori (Randy) Block, Sioux Falls; 17 grandchildren; 26 great-grandchildren; and sisters, Lillian Leitheiser, Sioux Falls and Janet (Sylvan)  Schetnan, Garretson.
He is preceded in death by his wife Cathren, brother Harley Sievers, sister Clara Warwick, daughter Dana Larsgaard and sons, Edward and John Sievers.